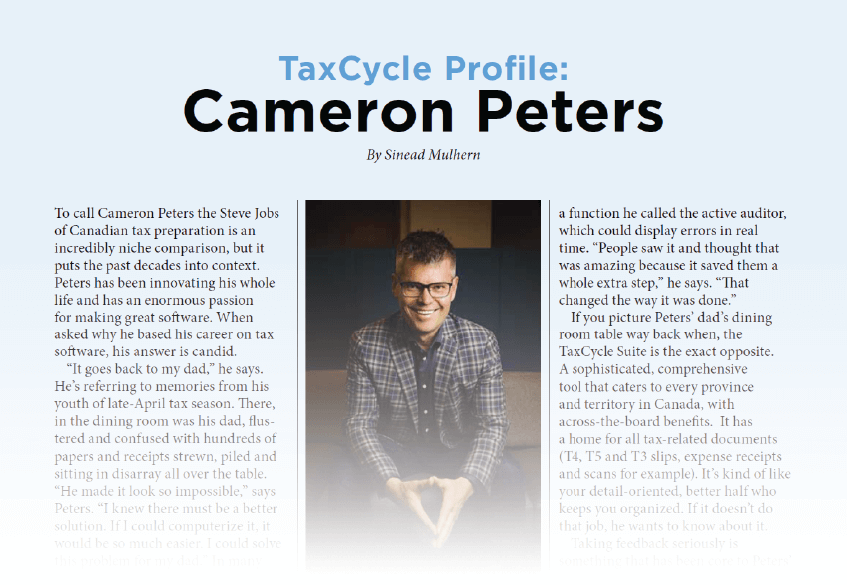 TaxCycle was founded by Cameron Peters, the original creator of Cantax® and ProFile® software. The CPA recently featured his story in their Pivot magazine. Read the story below to find out how Cameron has shaped over 30 years of Canadian tax software.

To call Cameron Peters the Steve Jobs of Canadian tax preparation is an incredibly niche comparison, but it puts the past decades into context. Peters has been innovating his whole life and has an enormous passion for making great software. When asked why he based his career on tax software, his answer is candid.

“It goes back to my dad,” he says. He’s referring to memories from his youth of late-April tax season. There, in the dining room was his dad, flustered and confused with hundreds of papers and receipts strewn, piled and sitting in disarray all over the table. “He made it look so impossible,” says Peters. “I knew there must be a better solution. If I could computerize it, it would be so much easier. I could solve this problem for my dad.” In many ways, his dad was the original client.

When Peters first started creating software, most high-school students didn’t have their own computer. Peters would sneak into Radio Shack to test his programming skills. He was tinkering with the tech of the era making a streamlined system to simplify his teachers’ report card writing. During his after-school hours, he’d attend teacher conferences. “By showing the software, I understood the perspective of what teachers needed to get their job done,” says Peters, now CEO of Trilogy Software, the company that created TaxCycle. “That’s still the way I do things.”

Thirty-some years later, it’s not hard to believe that the brainy software-creating teenager turned into someone who many would now call the father of modern, Canadian tax software. While his clientele has changed, his philosophy hasn’t. He’s the guy who pushes the limits of computers to make the livelihoods of other Canadians easier.

His dive into tax software really started in 1985, when a friend of a friend was developing tax software and needed a programmer. Peters stepped in and six weeks later, launched Cantax® (now a Wolters Kluwer® product). It was the first of his many innovations in the Canadian tax sphere.

By the mid 1990s, as electronic filing of tax returns was beginning, Peters co-founded a new company, GreenPoint Software (which eventually sold to Intuit® in 2000). ProFile® tax software was not only the first of its kind built to function on Windows® 95, but it also changed the entire industry’s approach to tax software. Peters still remembers feeling frustrated by a two-part data entry system (one in which you entered your data and then told the auditor to check for errors) at a trade show. The irritation pushed him towards a eureka moment where he went back to his hotel and designed a function he called the active auditor, which could display errors in real time. “People saw it and thought that was amazing because it saved them a whole extra step,” he says. “That changed the way it was done.”

If you picture Peters’s dad’s dining room table way back when, the TaxCycle Suite is the exact opposite. A sophisticated, comprehensive tool that caters to every province and territory in Canada, with across-the-board benefits. It has a home for all tax-related documents (T4, T5 and T3 slips, expense receipts and scans for example). It’s kind of like your detail-oriented, better half who keeps you organized. If it doesn’t do that job, he wants to know about it.

Taking feedback seriously is something that has been core to Peters’s work ethic since the days when he earnestly took it upon himself to solve his teachers’ report card woes. Now, it’s about helping Canadian industry people do their thing, stress-free.

The entire TaxCycle team shares this goal. Whether it’s responding quickly to legislative tax changes when they are released by the Canada Revenue Agency, or implementing the latest electronic services (like digital signatures), Peters and his team know that talking to customers on a daily basis makes for great tax software.

“We’re giving them tools that allow them to make money to send their kids to school and take care of their parents when they get older,” he says. “You’re building your business around our software and when people trust us with that, I feel very grateful.”

Sinead Mulhern is a Canadian journalist and full-time freelance writer. She writes about all things lifestyle including: personal finance, travel, health and wellness. Her work has appeared in MoneySense, Lowest Rates, Toronto Life, Chatelaine and Best Canadian Essays. Her favourite part of her job is interviewing other Canadians about their stories. 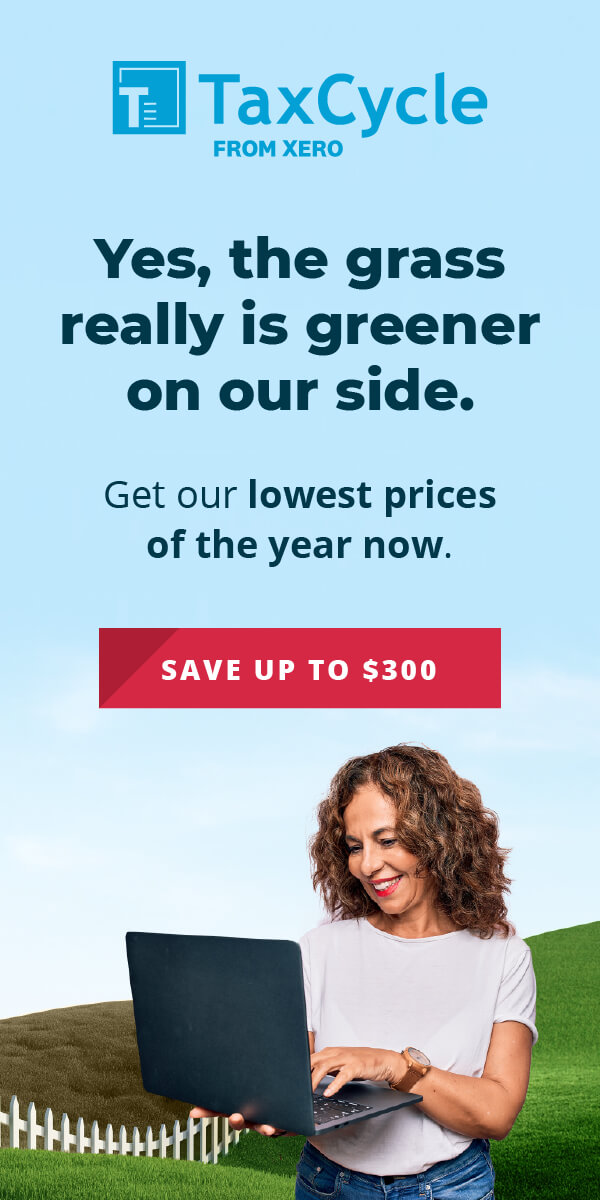